Did I mention I have become the matchmaker for a sweet Jewish male, 40-ish, whom I met at the Rainbow Gathering? Truly, all things are possible. It’s a magical kinda-place, a Rainbow Gathering, where conventional rules seem to be forgotten. Barter is favored as no money changes hands; meals are free if you are hungry and your needs seem to be supplied, even from those around you who will give all they have if you need it. Or so it seemed to me.

I found myself “stuck” during a driving rainstorm, under some tarps and around a blazing fire at Home Shalom, one of the two Jewish camps at the Rainbow Gathering. We had gone to visit, and then the rain had started and my friend and I found ourselves without ponchos or umbrellas as a sea of mud started to form in the hours and hours of rain that was to follow.

We were welcomed, oh so welcomed, and loved, oh so loved, us two women huddled in their camp chairs hoping to soak up some warmth. Meanwhile, folks cooked and as the rain continued and my tummy rumbled, I willed the nourishing food to hurry up so I could put in where it belonged and stop the hunger. Sure enough, a while later we were ushered to the feast and ate our fill of baked eggplant, cooked garbanzo beans, tzatziki and other yummy things all piled onto our bliss, which was the one thing I did think to bring. (Bliss being the Rainbow name for something to eat from.) Not knowing I would end up away from camp for hours, I had given my water to someone on the trail who had asked, but filtered water was there and after finishing my meal, I used my plate to drink some. Ah, bliss indeed. 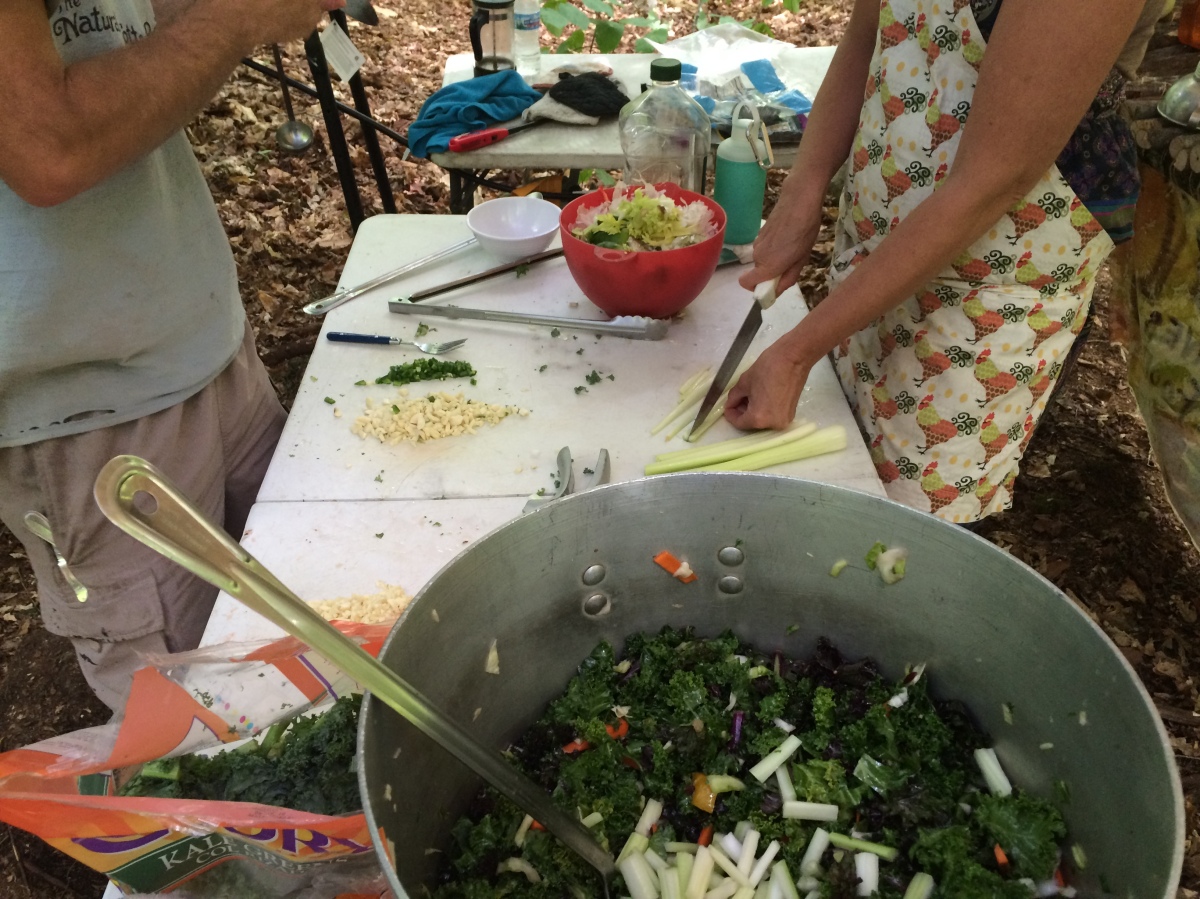 Shortly after, Shabbat started, a wonderful singing time of joy and celebration and all gathered began to celebrate together – reformed Jews, Orthodox Jews, Hasidic Jews, Gentiles and everyone else who stumbled into camp to escape the deluge. The sounds of Shabbat brought many in from the trail and out of the woods – and I watched as person after person celebrated Shabbat. We danced around the fire celebrating a God who loves us. It continued for hours. I was fascinated to see the men taking the lead in this celebration, and realized how much we’ve missed it in Christianity where we are all restrained and pent up and feel self-conscious as we raise our hand to worship our God. Oh that my Christian brothers would celebrate God as these men did.

I met Wilson just before Shabbat, I think, or maybe it was during.  I don’t remember. We talked, he explained, and we enjoyed the company. Two days later I ran into him again on the trail and we talked for a long, long time. It was then I became a matchmaker. I think of the song from the movie, Fiddler on the Roof, “Matchmaker, Matchmaker Make me a Match” mashing with Beyoncé’s “All you Single Ladies”. Anything can happen at a Rainbow Gathering.

So all you single ladies – Wilson is looking for you. Late 20’s through the 30’s preferably. Jewish currently or willing to convert. Home-oriented. His offer is stable, kind and Jewish male. Self-employed and pilots planes for fun. Currently in New York but willing to relocate – maybe Texas, possibly Florida. Lots of brothers and sisters, more than a dozen dearly loved nephews & nieces. I am not sure why this man is not married. Maybe his dreams stretch so much further than the area he lives in. He believes it the will of God we met. Somehow so do I.